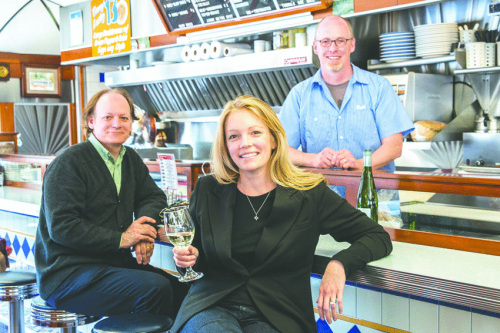 A lecture series featuring Northland College professors has been a dream held by Delta Diner owner Todd Bucher since he started up the café 10 years ago. He said he wanted his customer base to rise before he tried something as unique as the series.

Erica Hannickel will probably find one summer night of promoting her new book the sweetest.

The Northland College professor will drink Catawba sparkling wine in June with those listening to her talk about wine in the 1800s — the second of three lectures taking place at the Delta Diner west of the college’s home in Ashland.

The first of the series begins at 6:45 p.m. Saturday with Northland professor of religion and philosophy Les Alldritt talking about a “zen” style of eating and life inside a Japanese monastery.

Hannickel’s talk is June 22. The finale of the series is July 20, when professor of mathematical sciences and natural resources Derek Ogle releases findings from a study of the fish population in nearby Inch Lake.

Each lecture is accompanied by a custom dinner put together by café owner Todd Bucher. Saturday’s food will be served in nesting bowls crafted by a local potter that can be taken home for a price beyond the cost of the meal.

“A simple meal, a stimulating topic and a diner filled with adventuresome, fun people,” Bucher said. “All set the stage for a special, memorable meal.”

The lecture series has been a dream held by Bucher since he started up the café 10 years ago. He said he wanted his customer base to rise before he tried something as unique as the series.

Northland sociology professor Kevin Shanning is a neighbor to the café and talked with Bucher about the idea of the lectures. Then Shanning went to work to find colleagues with interesting topics.

“I loved it,” Hannickel said of the idea of speaking at her favorite breakfast place in the region.

She said Bucher has done a trial run with a speaker and meal and it sold out. Tickets for the series are selling well, she said.

Those listening to Hannickel in late June will get a preview of her book coming out this fall: “Empire of Wines: Wine Culture in America.” It provides the little-known history of the spread of wine from the East Coast to the Midwest and the demise of those regions before California rose as the top producer of American wine by the start of the 20th century and through today.

The sparkling wine is homage to the days when Cincinnati was producing it to raves around the world.

“It was one of the most popular wines for two decades in the mid-1800s,” Hannickel said.

She will talk about the mythology surrounding the man once called the “father” of winemaking in America, Nicholas Longworth. He’s responsible for the rise of the Catawba grape variety that inspired poet Henry Wadsworth Longfellow to write an ode to it in 1854 at its height of popularity.

Hannickel was raised in wine country in northern California and said she’s had a book about wine in her mind since then. When she was studying in Iowa for her doctorate, she came across old horticultural magazines that praised the grape as a means of legitimizing a nation.

“They called grapes empire-builders,” she said, “Like ancient Greece or Rome. The thought was that was what America needed.”

Those old magazines opened a niche for her to finally get to serious wine research. Her quest to understand the rise of wine culture in the 1800s began and is culminated in the book.

Hannickel has never tasted the wine that made Cincinnati and Longworth famous. She said she’s thrilled Bucher decided to have such a tactile item available for her café talk.

“He bought a couple of boxes,” she said with a laugh.