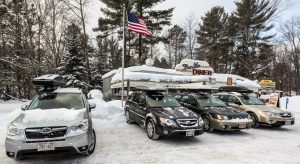 A grassroots Chequamegon Bay area group has a vision of creating options for northwestern Wisconsin residents to invest their money in Main Street versus Wall Street.

The local investment group consists of passionate individuals and regional experts who are helping navigate and research the concept. One member, who first introduced the idea to the area after attending the Building Local Economies (BALLE) conference in Washburn, is Mayor Scott Griffiths. He said the movement is about providing opportunities for both local businesses and investors.

“It would be a way for someone to go to invest in a business they know and believe in versus sending their money away” to Wall Street, he said.

Unlike a loan, the goal is to find creative (and legal) ways to make equity investments versus loans to help a business grow. By accepting such investments, recipients don’t have to worry about interest payments up front but can grow their business while the investor gets a return based on how well the company is doing.

While the concept sounds simple, finance regulations are not. As a result, the group is studying its available options.

“We’re also trying to determine who and where the businesses are that could benefit from this type of investment,” Griffiths explained, and how much they’d be willing to invest.

He envisions the process will ramp up as people learn about it and the group has successes to share with the community. And, while participants can’t take credit, one local business is experiencing significant success with raising capital through its local customers.

Delta Diner opened its doors in 2003. The East Coast diner sprung up practically overnight in the middle of nowhere, or in the owner’s belief, the middle of somewhere – Delta, Wis., a dozen miles south of Iron River.

“Every time I drove by that spot with the broken down cobblestone building, I felt something should be there,” owner Todd Bucher said of the site.

After doing his homework, Bucher learned that from 1923 to 1972, the site was something special. The broken down cobblestone building was actually the old Delta Store, which included a gas station, groceries, post office and tavern. “It was the center of the universe for folks living in that area.”

Today, it’s home to the authentic East Coast diner. Bucher recognizes Delta isn’t exactly a population center, but says his focus is creating a unique destination dining experience to which folks will drive. So far, he seems right.

It wasn’t soon after he opened his doors that customers recognized how unique the dining experience was and approached him to see if there was a way they could become a part of his dream. While he appreciated the gesture, Bucher genuinely believes that until you prove your concept the financial risk should lie with the owners.

As time went on, business exploded. Successful as it was, to reach the next level he needed to built it out and maximize efficiencies. However, after 24 months of exploring finance options, he discovered traditional lenders just weren’t interested in his business model.

It focused on slow growth. After opening, he removed about 30 percent of the seating so they could focus on the customer experience and ensure they were bringing in the right type of customer. He knew that if he built an experience you couldn’t get elsewhere, people would make the drive, which would bolster sustainability. The banks didn’t agree.

“They looked at the fact that we were walking away from revenue and said, ‘you’re doing what?’”

Frustrated by his experience, he worked with a consultant to create a five-year business plan and explore other finance options. It turns out that state statues allowed him to take on a number of LLC members who were more than investors. These folks would actually own a percentage of the business.

Bucher knew people were interested, so he found creative ways to let customers know if they wanted to get involved, it had become an option.

Working with his brother’s ad agency, he organized a subtle campaign displayed within the diner that let interested parties know something was happening. If they reached out to Bucher, he steered them to a password protected video that explained his vision for the diner and what the equity involvement would entail. If folks were still interested, they could attend an informal meeting to learn more.

“We were looking for certain types of people to get involved,” he said. “We weren’t selling it as ‘Hey, this is a gold mind investment’. But instead, we were going after people passionate about our business model.”

Once again, Bucher experienced success. By the time the campaign was over, he had recruited 22 new LLC members to his business. They own 40 percent and invested $400,000 towards the diner. They attend annual meetings and vote on important business matters. And, while the return on their investment might take longer than is traditional, Bucher believes it will come.

“From an organizational standpoint, we are a good business with strong financials. But these people also have a personal or emotional connection to our vision. It is a different type of return.”

His investors have changed the future of the diner.

“The impact for us is huge,” Bucher said. “We have a larger, more efficient facility that we paid for in cash. This allowed us to do what we otherwise couldn’t have done.”

Looking ahead, Bucher is ramping up for an exciting couple years of growth and new experiences. One way he’s enhancing this destination dining experience is by offering a series of dinner events that range from a Blue Plate Lecture series that “treat the stomach and feed the brain” to themed meals and outdoor barbecues and bands.

The diner also plans to add e-commerce in the next 12 months to serve far away customers who might be craving the red beans and rice or homemade chipotle paste but can’t make the drive to Delta because as much as the diner is in the middle of somewhere, it is still a long distance from most places.

Beth Probst is a freelance writer based in Iron River.