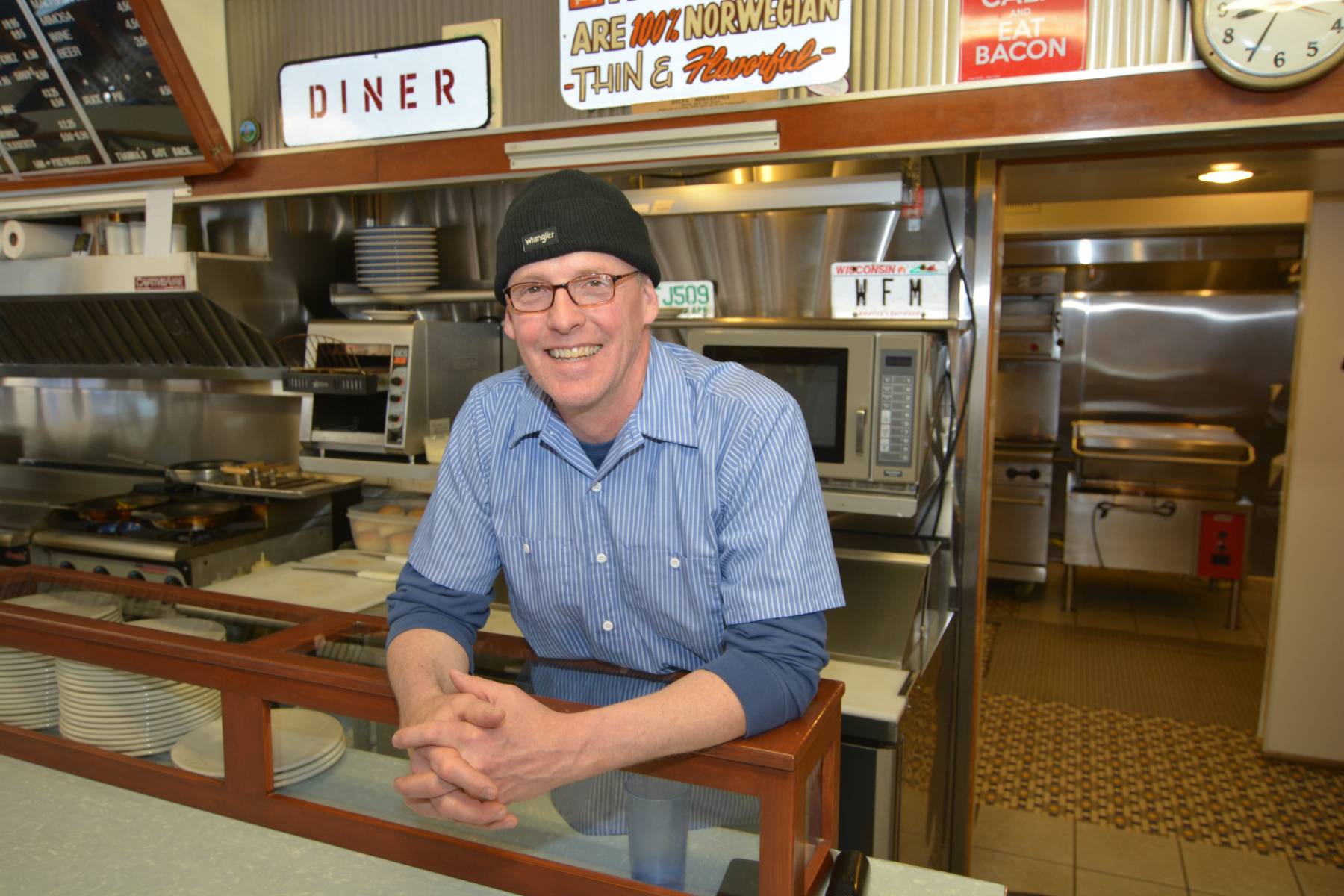 Two summers ago, I was driving down Bayfield County H, making the run from Iron River to Hayward and trying to spot deer before they jumped in front of my car.

It was 8 p.m. and the pines were golden green in the setting sun as I rounded the curve. What I saw around that curve made me hit the brakes. For a second, I thought I was on the set of the movie “The Shining.”

That movie recounts the tale of a haunted lodge high in the Rockies and the people who take care of it during one spooky winter.

What I stopped for wasn’t haunted, but, in the eerie glow of twilight, it looked as if it had been put in place by a troop of fairies with American urban taste. It was a sparkling, like-new, 1940s diner, smack dab in a stand of high pines.

The diner was closed that evening. (It’s open only on Friday and Saturday nights. Four other days of the week, it serves only breakfast and lunch.) But after getting out of my car and peering into the windows, I resolved to return for a meal.

I made good on that resolution in June and, after three visits in one week, I can say that the Delta Diner is worth a visit, even if you have to detour off the main road.

Even if you don’t consume so much as a cup of coffee, a visual treat awaits you if you stop.

Some dishes on the menu hail from the area’s Scandinavian immigrants, and decorative tiles scattered throughout the restaurant are light blue, white and yellow, in deference to the Swedish flag. Beyond that, the decor is 100% classic American, with pressed stainless steel panels on the back walls and stainless steel and rich wood trim throughout.

On most days, Todd Bucher mans the grill. His menu showcases Wisconsin foods. The bacon is from Nueske’s in Wittenberg and only beers from Stevens Point Brewery are served.

One of the diner’s three blue-plate specials ($6.95 each) the week we visited was a casserole of turkey and wild rice a North Woods staple in cream sauce. And true to the Nordic baking traditions of northern Wisconsin, a freshly made lemon bundt cake ($1.95 a slice) was displayed on the cake stand.

In 2004, the Buchers bought the old diner, which had been built in New Jersey in the early 1940s, according to Todd Bucher.

It was rebuilt a few years ago by a specialty Ohio firm that had found its shell abandoned in a field in upstate New York.

The diner arrived on a trailer, and Bucher had it installed at the site of the old Delta General Store, which burned down in 1972.

That store, Todd said, had been the center of the community of about 250.

These days, the diner has assumed that role. Among the diner’s regulars are neighbors Billy and Marcus Meyer, whose parents owned the general store.

Billy has become such a regular, Todd said, that one of the diner’s breakfast specials is named after him. (Billy’s Special includes two eggs, toast and coffee for $3.75). It’s not uncommon for customers and staff to address each other by first names.

Beneath that layer of sociability lies its real draw: the food. In addition to wanting to spotlight foods and beverages from Wisconsin, the Buchers emphasize home-cooked, high-quality dishes. Order hash browns ($2.25) and plan on a short wait Todd or one of his co-workers will fry them to order. Iced tea ($1.50) is freshly brewed, not instant.

Visit the diner on Friday night for its perch fish fry ($9.95 small, $11.95, $16.95 large) and you’ll get real Great Lakes perch not the European substitute (called zander) that other places serve, Todd told us when he delivered our plates to the table.

True to his word, the perch were much as I’d remembered them from the fish fries of my youth. Bucher had applied the thinnest of breading and pan-fried them to ensure that their delicate taste wouldn’t be spoiled by old cooking oil.

My dining companion had cod loins ($7.95 for two, $10.95 for three), and while I couldn’t be sure they were the loin section of the fish, they were simply baked, still moist and served hot on a stainless steel platter with melted butter on the side.

As in the case of the perch, careful cooking ensured that the clear, light, lobster-like flavor of the cod came through without interference. And the potatoes served on the side were a mixture of regular and sweet potatoes that had been slowly fried in an open skillet for a firm texture.

If I had to pick one meal that stood out, it was lunch, which started with a bowl of the soup of the day chicken gumbo ($3). Bucher had combined all the right ingredients okra, green peppers, onions, celery, tomatoes and gumbo file powder with chunks of chicken to produce a soup that could have qualified as a one-bowl meal.

Then it was on to that turkey-wild rice casserole, in which the flavors of roast turkey, wild rice, celery, pimiento, mushroom and onion all were united by a genuine freshly made cream sauce. So many cream sauces are pre-made these days that tasting the real thing proved to be a sweet delight.

The pulled pork on my dining companion’s blue-plate special had been cooked long and slow to yield a smoky, sweet meat stripped off the roast by hand. With her permission, I speared an outside piece (which I relish for its chewiness) and plopped it onto a piece of the diner’s homemade bread. It was the best open-faced barbecue pork sandwich I’d had this year.

The slaw beside it had character as well primarily from a sour cream dressing that had just a hint of horseradish.

At breakfast, a ham and Swiss cheese omelet ($6.95) was generous enough to satisfy a bigger appetite than mine and had been made with large cubes of excellent ham and real Swiss cheese. But I found myself stealing bites of thin, crepe-like pancakes ($5.95), which a sign in the diner told us were Norwegian.

One of the marks of a good diner is great pie and cakes ($1.95 a slice for each), and I can attest to the excellence of both. On one day, the pie was Fruit of the Forest, which featured a blend of strawberries and raspberries in the filling. On another day, the pie was sour cherry, sweetened just enough to allow us to enjoy the fruit filling without puckering. Both were built on and covered with an excellent hand-made pastry crust.

And the lemon bundt cake was heavy, buttery and lively with the flavor of fresh lemon juice and rind.

One of the few disappointments about the diner was that a second or third pie wasn’t offered. Another was that the fried potatoes arrived so long after the fish in the fish fry that my fish would have been cold had I waited to enjoy them together.

Another sign in the diner had advised me to “save room for Swedish Cream ($3.75),” another house specialty. Raspberry sauce on top went a long way toward flavoring the sour cream custard that made up the dessert, but I couldn’t get past its basic, yogurt-like flavor.

On future visits, I’ll stick with the pie.

Dennis R. Getto’s reviews appear in this section every other Sunday and in Weekend Cue every Friday. Read them online at www.onwisconsin.com/dining. E-mail him at dgetto@journalsentinel.com.