Deluxe Omelet is Diamon’s reward for trek to Delta Diner

The Delta Diner looked a little too shiny and clean to be the authentic old establishment I was expecting, but I followed Dan Diamon into the place nonetheless on the promise of a just-right deluxe omelet.

Turns out the Delta Diner is – and isn’t – all that it appears to be. It’s more. It’s an old diner that looks brand new. It’s and icon of urban American plunked down in the northwoods of Wisconsin. And it’s historic community gathering spot that has been open less than a year.

Service was prompt and the coffee was hot on the chilly October morning that Diamon and I place our orders for deluxe omelets with marble rye toast on the side.

An Iron River native, Diamon now lives in Poplar. He likes to meet friends and business associates at the diner about 11 miles south of Iron River on Bayfield County Highway H. Sometimes he brings the family here, too.

When our omelets arrived, Diamon said the tenderness of the fillings and subtlety of the flavor combinations are what he likes so much about this breakfast staple, not to mention the just-right size.

Then I did something I reflexively do whenever I have eggs at a restaurant: I asked for Tabasco sauce. I acquired this habit about 14 years ago when my wife and I were on a job-hunting trip in Colorado. The job offers never came, but Tabasco on eggs stayed.

“I don’t think we have any Tabasco,” the waiter replied, going behind the counter anyway. “But we do have these,” he said, producing a caddy of no fewer than seven hot sauces.

Diamon enjoys hot sauce but never asked for it at the Delta. “This surprises me,” he said with a chuckle as we proceeded to blast the omelets’ subtlety away by auditioning each of the fiery condiments. 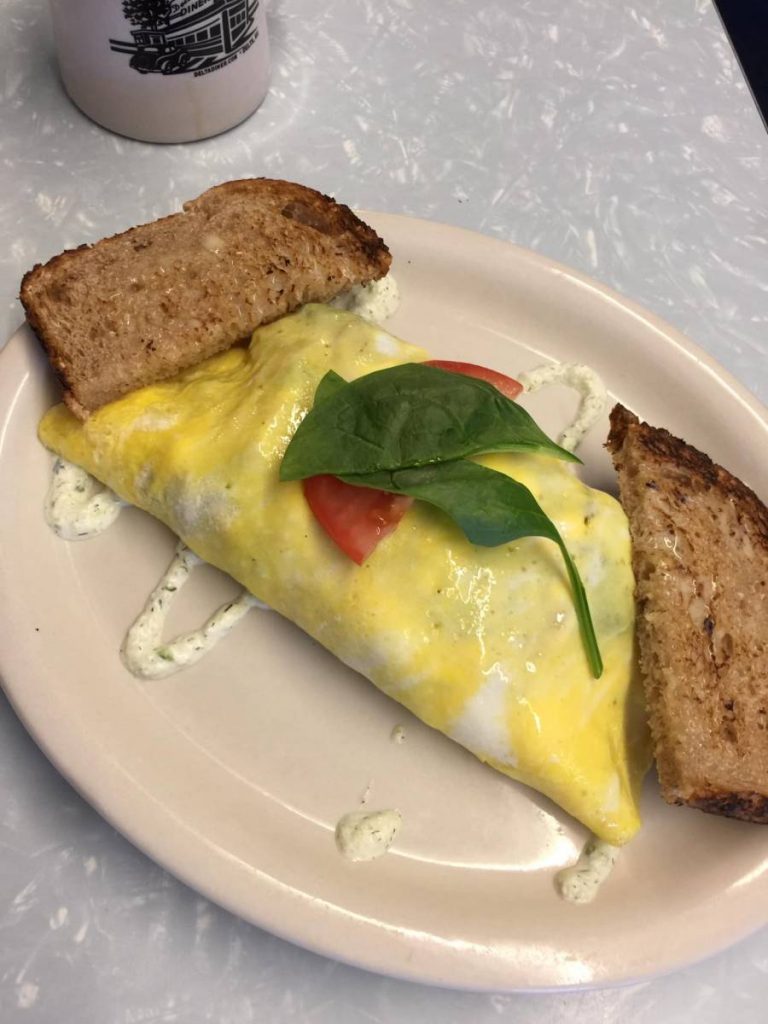 The three-egg omelet was filled with a tangy blend of cheeses that I couldn’t quite identify. The cheese melted subtly with the sautéed onions, green peppers and mushrooms. The mushrooms were sautéed enough to concentrate their flavor, a stop a lot of restaurants seem to skip. The ham was memorable: not the presses, water-added, food-service kind, but old-fashioned country ham, the type you’d serve your own family for Easter dinner.

This wasn’t necessarily a gourmet omelet but a good, classic dish, well-executed and made all the more enjoyable in a classic, intriguing and comfortable setting.

The setting, in fact, is a key par of what makes the Delta Diner worth the drive (especially the 110 miles round-trip from Duluth.) You’re tucked in with other patrons in the long, narrow, train-like car. You watch your food being prepared a few feet away.

Here’s how comfortable the place is. At one counter, an urban-professional-looking woman worked her laptop computer over breakfast while a group of plaid-and flannel-clad locals joshed and ate in a booth. Another booth held guys with fishing caps, while at the other counter, a multiply-pierced man scrawled intently in his notebook over his breakfast.

I also had the chance to sample a “Norwegian” pancake (“so good the Swedes are begging for the recipe,” the menu taunts), and it was sweet and soft with a slightly crispy side, each bite revealing a slight whiff of sweet spice.

ABOUT THE OMELET, RESTAURANT

Most of the Delta Diner’s menu items, including the deluxe omelet, are based on dishes that co-owner Todd Bucher, his wife, Nina, and their circle of friends liked to cook for themselves before the Buchers opened the restaurant in November.

When they launched the diner, the Buchers hoped to do more that start a retro-hop destination restaurant. They also wanted to recreate a community gathering place for Delta Township residents, which was a role served by the old Delta Store from the early 1920’s until it burned down in 1972. The Delta Diner sits on the store’s former site.

The Delta Diner is a Silk City Diner, built in 1941 by the Patterson Vehicle Co. It was completely refurbished and moved to the site last year. Most days, Todd Bucher works the diner’s small grill.

Like most classic diners, the Delta has breakfast all day, blue plate specials and bottomless cups of coffee along with Formica countertops and stainless steel and tile everywhere. It has northwoods twists like Friday fish fries and Saturday prime rib nights. But it also has surprises: a short but decent wine list, some unusual specials (Hungarian goulash one day, red beans and rice another) and even something called a “Norway Lily” a Scandinavian crepe wrapped around a piece of apple pie.