DELTA – Who could have ever imagined that one day a sleek and shiny stainless steel 1940s classic diner, complete with standout neon lights, would appear on the back roads of northern Wisconsin? 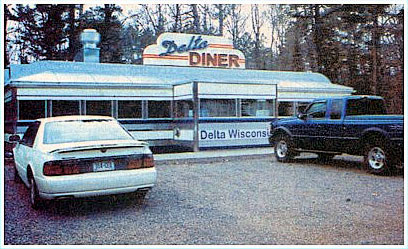 It may not be Believe-It-Or-Not material, but it’s close. Prepare yourself for a blast from the past with the opening of the Delta Diner – located on the roadside of Cty. Hwy C, just a stone’s throw from the junction of Delta-Drummond Rd. and Cty. Hwy. C.

The diner is owned by Todd and Nina Bucher of Iron River. Todd admits to becoming a bona fide “diner junkie” following a family trip to the east coast when he was just a boy.

“When I was 12-years old, my family took the obligatory vacation road trip in a station wagon out east to places like Gettysburg and Washington,” Todd Said.

“Several times along the way we stopped at diners and they just stuck with me. The character of these places grab you.”

With a warm smile and excitement in his voice, Bucher enjoys talking about the unique history of the American diner phenomenon as much as he delights in relating his personal story of finding an abandoned diner and bringing it back to Delta.

The logistics involved in transporting a steel frame classic 1940s Silk City diner from a farmyard in New York to a frame-up restoration company in Ohio, and ultimately the remote town of Delta, is as fascinating as it is extraordinary.

The Buchers spent over two years researching the history and availability of diners manufactured in the 1930s and 1940s. Bucher said about eight manufacturer’s with names such as Silk City, Paramount, Mountain View, Coleman, and Worchester dominated the industry.
Owners, Todd and Nina Bucher, seated at the counter of the Delta Diner which is located on the site of the old Delta Store; a local landmark which burnt to the ground in 1972. Chef Jim Anttila behind the counter. Call the Delta Diner at (715) 372-6666 for information.

“Diners were basically modular buildings hauled to a site and put on a foundation, or put on the ground,” Bucher said.

“The Paramount had more options for individuality so they were considered the Cadillac.

“The Worchester was the original lunch car, which was horse-drawn and set up like a sidewalk lunch cart.”

The Delta Diner is a shining example of a perfect, money-is-no-option restoration. And it heralds back a bygone era in the most unlikely location. 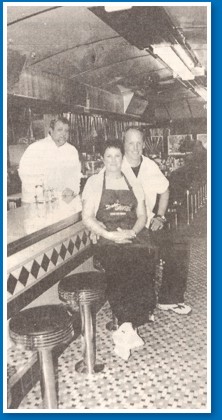 Set against a wooded background, the exterior is spotless stainless steel with domed monitor-style roof line which looks similar to a train car. Bucher said most people confuse the diner with train cars because of the similarity in design.

The neon sign perched over the doorway creates a warm welcome as well as adding another design element typical of the 1940s diners.

The interior has been adapted from the original design to comply with today’s health and building codes and makes seating a little more spacious. But otherwise, the moment customers step inside the dining area they take a step back in time.

The stainless steel backdrop is the focal point of the dining room, which is crafted in the sunburst pattern typical of the Silk City diners.

The ‘kitchen’ is located behind a 37-foot Formica counter lined with 32 blue vinyl covered bar stools. Chef Jim Anttila has been hired to prepare all the traditional diner fare as well as daily Blue Plate Specials and main menu items.

“Ninety-percent of the cooking is done behind the counter in the true tradition of diners,” Bucher said. “I added a back room for coolers and storage and an area for prepping.”

On the opposite wall, lined with windows, are eight booths with seating for 32. The wood trim is stained with rich cherry stain also common in the Silk City models.

Throughout the interior, a diamond pattern of cobalt blue tiles accented with a warm yellow trim adds one more authentic touch to the restoration.

The diner will also be serving fish fries on Friday nights starting Dec. 15. Domestic and imported beer and wine are served.